With a synchronised blend of contrasting colours and impasto impressionism, Liz Muir’s art captures the colour diversities and robust textures recurringly found within the Australian landscape. Within the confides of the canvas, she utilises her artistic execution to strike a uniquely distinct mood, perfectly correspondent and meaningful to each work she renders. While some forms, like the trunk of a tree or the image of unspoiled water, are reminiscent of their real-life counterparts, Liz’s work relies heavily on abstract qualities and fixtures to derive its ultimate expression.

While the majority of Liz’s works are executed in oils, her process begins primarily in watercolour, painting subjects on rough paper in an effort to examine light, contours and composition. Through this process, she is able to study colour achievement, before moving the work to a much larger canvas. With oils, she has the capacity to further create texture and sheen, by applying the medium directly onto the canvas with the use of a palette knife. A tremendous amount of time is devoted to colour mixing and she frequently constructs her own tones and tints to create a sequence of drama and subtlety, overstatements and understatements. The entire process provides Liz the greatest means in which to describe what she observes within her surroundings and tackle the most alluring elements of the environment.

Having been raised in Italy for several years during childhood, Liz quickly developed a love for ancient architecture and natural settings. Later living in Singapore and Hong Kong, before becoming an international hostess for QANTAS airlines, gave her exposure to exotic florals and botanicas that would go on to profoundly inspire her creative work. Now residing near Pittwater, New South Wales, Liz is continually influenced by beguiling gardens and sea scapes, where she often observes the motion of natural daylight and dramatic skies overhead. Fittingly, she takes her creative nods from Pablo Picasso’s use of colour, Claude Monet’s depiction of water, John Olson’s quirky abstraction of nature and Jackson Pollack’s uninhibited sense of freedom.

Liz is currently developing new abstract series Indigo, a collection of works largely derived from shades of turquoise, lime green and indigo. Her previous collections and existing works can be found on Art Lovers Australia, Bluethumb Gallery, on her website lizmuir.com.au as well as on Instagram @lizmuirart. 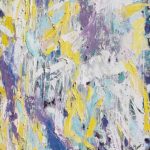